Message from the Board of Directors 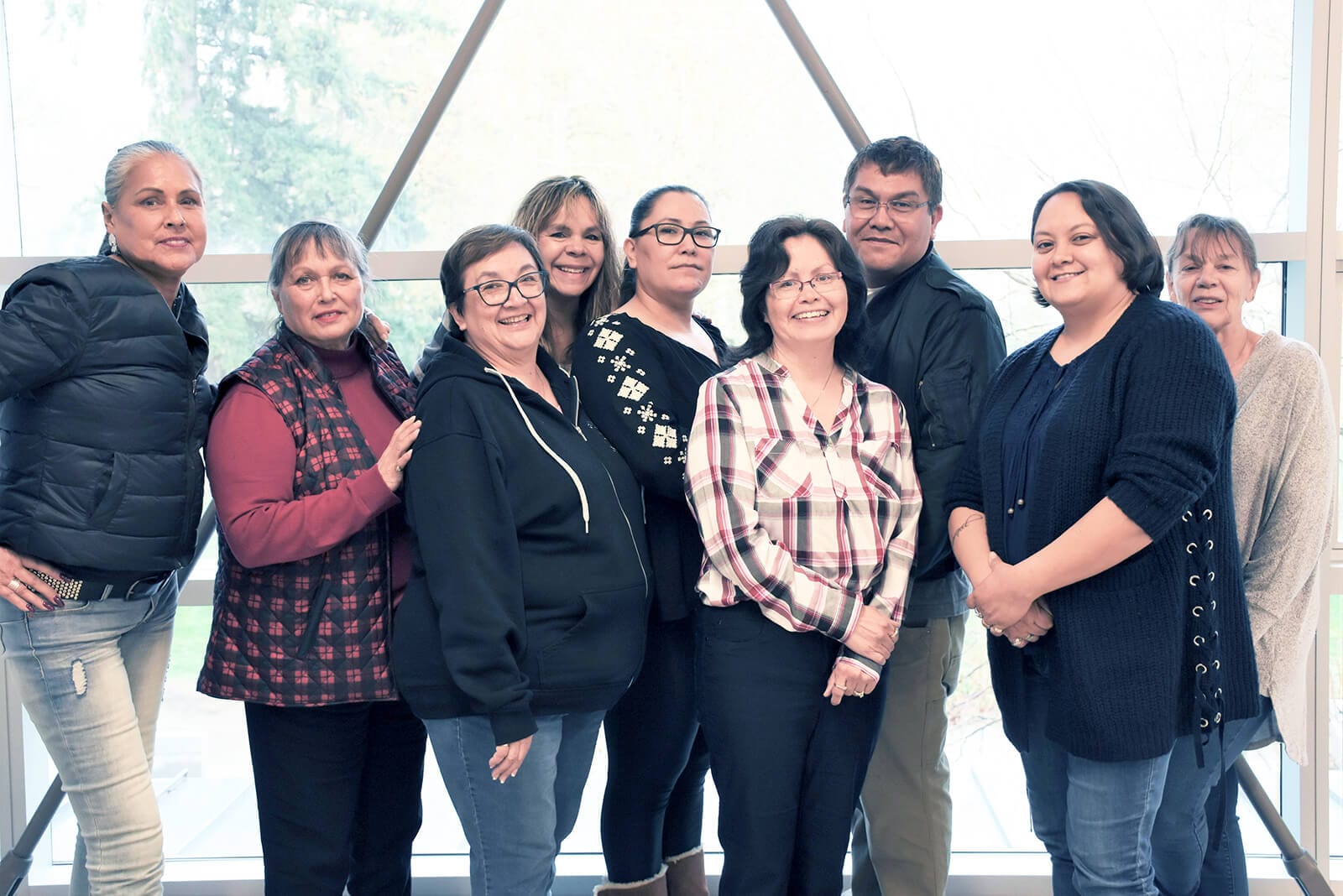 Welcome to the fall edition of FVACFSS’s quarterly newsletter. We hope everyone had a wonderful summer.

The Agency was busy this summer moving forward with our new Service Delivery Revitalization (SDR) which results in an increased focus on family strengthening and on permanency. The work involved reassigning staff and creating a team dedicated to serving Stó:lō communities. We thank all our partners for helping us find office space and welcoming our staff into your communities. We  look forward to working with you in a consistent, collaborative way to achieve the best outcomes for families.

To Honour our Elders this summer the Board was pleased to sponsor the Elders attending the BC Elders Gathering in Vancouver in July. I’m told the Elders had a wonderful time and are looking forward to next year’s gathering. Check out our website and this newsletter for pictures and a story about the gathering. We value the Elders and appreciate their support, helping hands and good work.

This fall we plan on moving forward with the goals we established at our June 2019 planning meeting. The Board’s focus is improving Board Governance and our fulfilling the Board’s responsibility for Operational Oversight of the Agency, improving our visibility through improved communications, and enhancing the role of culture in the Agency.

Our Annual General Meeting (AGM) is on Oct. 23, 2019 starting with dinner at 5:00 pm, however doors will be open to receive membership applications starting at 2:00 pm. The AGM is being held at Squiala First Nation and we look forward to reporting to you and answering any questions you may have. Membership application forms will be available at the door. In order to participate in the business of the meeting by voting you must be a member and registered to vote. Voting paddles will also be at the door and provided upon registration. To become a member you must be Aboriginal, over the age of 18 and live either on or off reserve within our geographic service area.

Be advised that we are also accepting nominations for five board seats. The seats are filled through a nominations process and the successful candidates are elected at the AGM. In order for a nominee to be eligible, NOMINATION applications must be received by FVACFSS before 5:00pm on Tuesday October 8, 2019. All nomination applications must be received by the deadline and will be reviewed by the Nominations Committee to confirm the Nominee’s eligibility and applicable experience. All nominees considered for election must be a current member of FVACFSS and be present at the AGM.

The full AGM package with nomination application and membership forms is available at our offices or on our website: https://www.fvacfss.ca/event/save-the-date-annual-general-meeting/. Click on Find Events and scroll down to Annual General Meeting.

The Board would be pleased to meet with stakeholders to tell you in person about the work we’re doing. If you would like us to make a presentation at your next meeting, please contact Michelle Giroux at [email protected].

Marion Mussell, on Behalf of the Board of Directors. 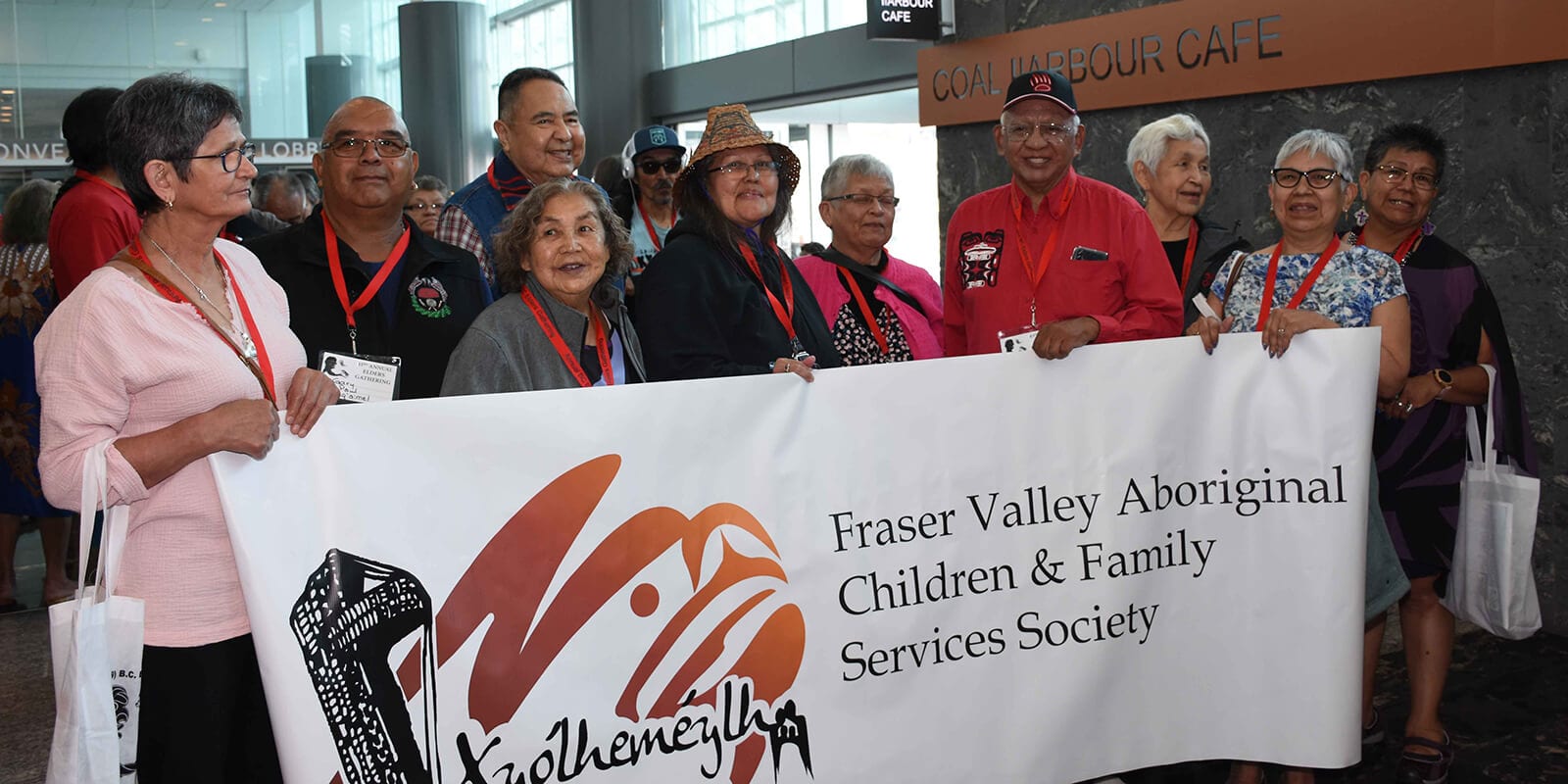 More than 1,800 elders and their support people arrived at the Vancouver Convention Centre July 23 for two days of education, networking, entertainment, and a little pampering at the 43rd Annual BC Elders Gathering (BCEG).

At FVACFSS we sponsored seven Elders as well as a few family members to attend the gathering.  Hosted by the BC Elders Communication Center Society, the gathering drew Elders from across the province. Sponsoring the Elders to attend was made possible by a grant from the New Relationship Trust.

Master of Ceremonies, John Henderson from the Wei Wai Kum Nation welcomed them. Squamish Nation, Tsleil-Waututh and Musqueam Nations also played prominent roles in welcoming the Elders to their traditional territories. Henderson talked about changes he has seen over the years and urged the Elders to have a clear vision of what they want for future generations and to work to achieve those goals in a positive way.

“UNDRIP (United Nations Declaration on the Rights of Indigenous Peoples) gave us the tools to make the changes with governments,” said Henderson.

Squamish Nation Chief, Janice George, talked about the importance of the cultural knowledge that the elders possess on the impacts of colonialism. “We want to erase that interruption in our culture – and that is what you elders do,” she said.

Premier Horgan announced that his government is working on legislation that will implement the United Nations Declaration on the Rights of Indigenous Peoples (UNDRIP) as a means to address reconciliation with the Indigenous peoples of BC. He also announced that he is the first premier to appoint an elder advisor - Shirley Alphonse of T’Sou-ke Nation.

Melanie Mark from the Nisga’a Nation and an elected MLA representing Vancouver/Mount Pleasant, as well as the Minister of Advanced Education, Skills and Training, told the crowd that when she looks at the elders she sees resilience.

“Our grandparents had to fight for our rights and for that, I am so proud,” she told them. “My two daughters have a better future because you fought for their rights and I am going to continue to fight for your grandchildren’s rights.”

Keynote speaker Jody Wilson-Raybould talked about how her culture and family instilled values and cultural teachings. She also talked about how these values came in conflict with the Trudeau government and how she was removed from office as Justice Minister and from the Liberal party.

“I remain incredibly optimistic about our futures because building Indigenous nations ensures a stronger and better Canada,” she told the crowd.

The afternoon events featured lunch in the large ballroom, the vendor’s room where they could shop for jewelry, medicine, clothes, as well as a pampering and self-care area for Elders where they could have a nap.

The evening events featured entertainment by comedian Howie Miller, karaoke,  and the elder’s dance. FVACFSS Elder advisor Roger Andrews and his wife Audrey Andrews were honoured as past King and Queen of the Gathering.

What Indigenous culture can teach about everyone about aging ....

Seniors Advocate for the province of BC, Isobel Mackenzie presented the following day on how everyone can learn from Indigenous peoples about growing old.

She said that while Non-Indigenous peoples have a longer life expectancy than Indigenous people due to a number of factors. “The effects of colonization and other policies, like the residential school and Indian Act, have, over the years, eroded the traditional way of life for many Aboriginal persons.  This erosion has had a negative impact on the health and well-being of individuals, their families and communities,” said Mackenzie.

However, she noted that the gap narrows at age 65 and speculated that it is because Indigenous cultures value their Elders more than the vast majority of European cultures. Mackenzie said: “As we age, we have a need to belong and to be valued. Western European societies generally push the elderly aside. First Nations don’t do that.”

Mackenzie noted that not only are Elders included, they are revered for their wisdom, traditional knowledge and the role they play in cultural continuity. "My hope is we can learn from Indigenous people how to embrace, support, respect and genuinely love the company of your grandma, your mom. 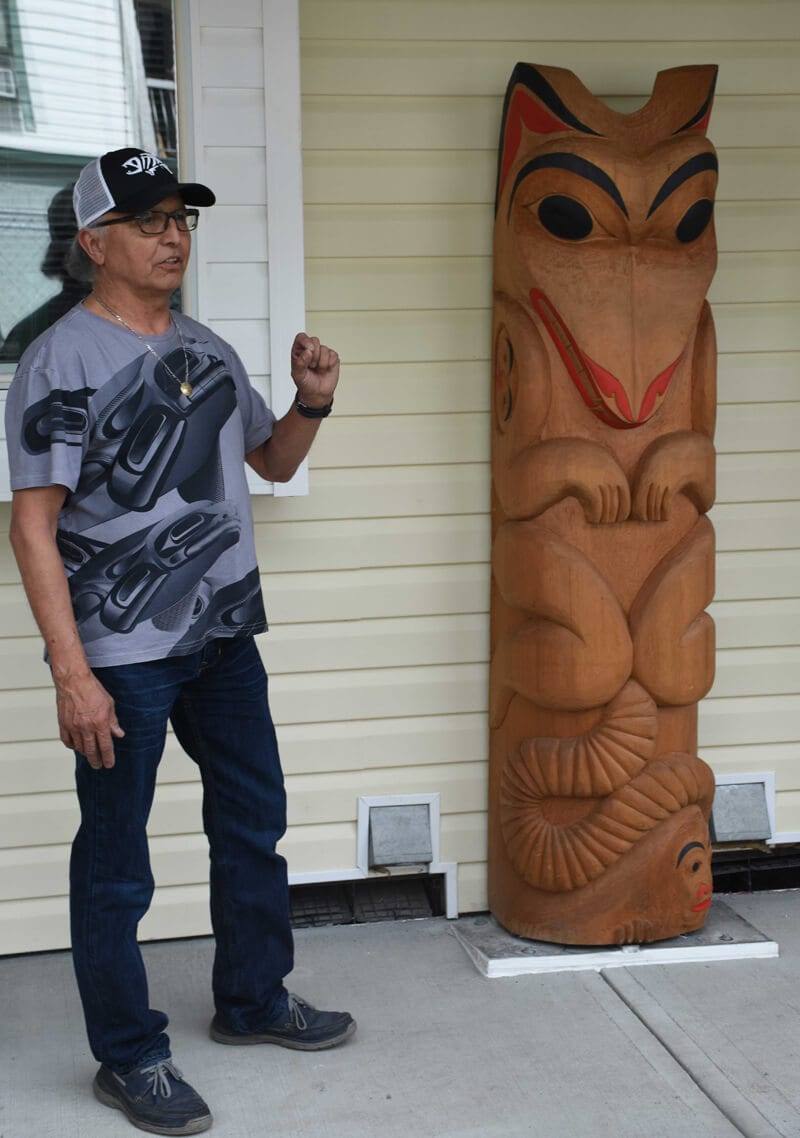 We celebrated the official opening of the Hazel Street office, Lalem ye Steqóye (House of Wolves), in Chilliwack on Friday, June 28. The highlight of the opening was the unveiling a beautiful red cedar carving by Peter Prevost. The new centre will be used for helping youth transition to independence, Sacred Circles, supported visits and family enhancement work.

In July we held separate cultural camps for boys and girls, a camp for  caregivers at Kwantlen First Nation, and youth day camps at several lakes in the Fraser Valley. In August we held our Family Camp at Soowahlie First Nation. Over 100 people attended and participated in arts, sports, canoeing, singing, drumming, storytelling, and traditional games and teachings. Special thanks to the Government of BC for the Community Resilience grant which enabled us to enhance the arts component of the camps. 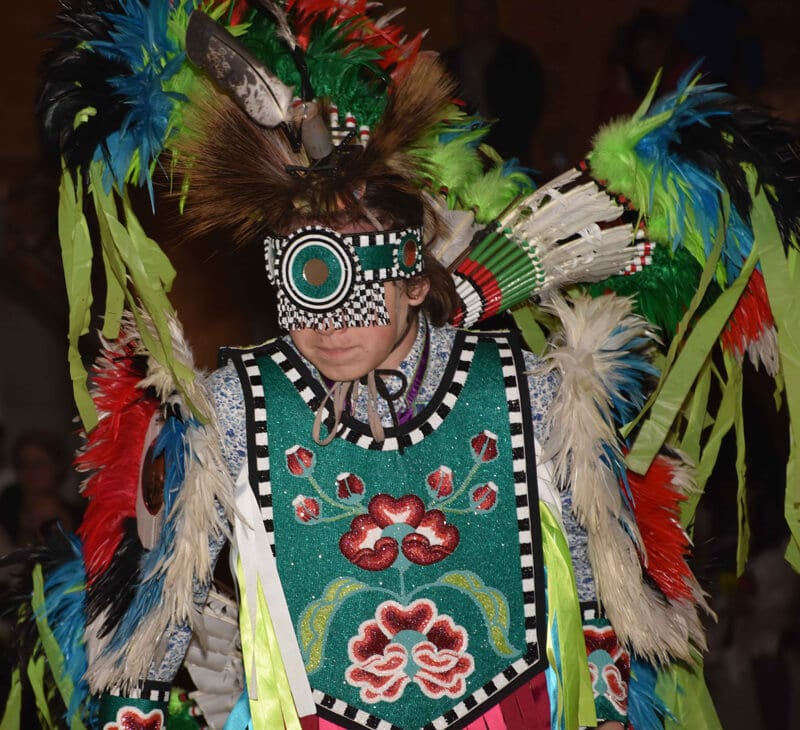 Approximately 120 people attended our first ever Cultural Gathering on Sept. 28 at Squiala First Nation. The event began with a Sqwedilech led by Saylesh Wesley. A Sqwedilech or Spirit Boards is a sacred ceremony and is among the Coast Salish most powerful and sacred medicine. The boards are carved and painted plaques that were used to cleanse the house and people present at the ceremony. The ceremony can only be performed by trained spiritual healers who are specifically gifted with these boards.

“Our children have an inherent right to know who they are and where they come from,” said emcee Chris Silver. 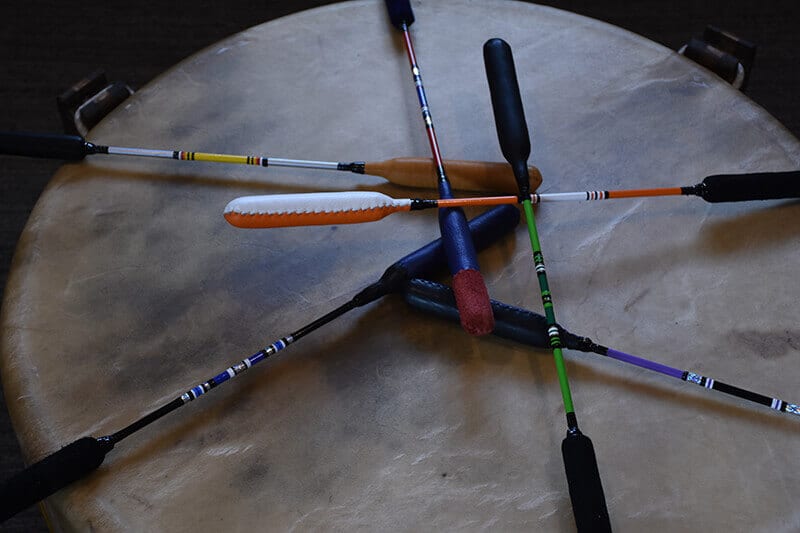 In order to be able to vote at our AGM, individuals need to be Indigenous, live in our service area and be a member. Please go to our website or one of our offices for an application form. We will accept applications or renewals every day leading up to the AGM, as well as at the AGM venue prior to 5 pm when the meeting gets underway. 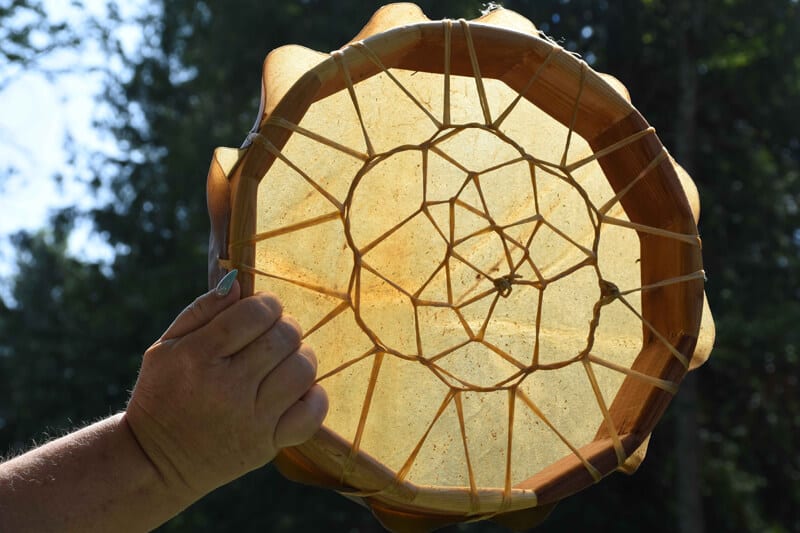 Free to attend
Registration Deadline: October 15, 2019
Register online or at one of our offices
www.fvacfss.ca. 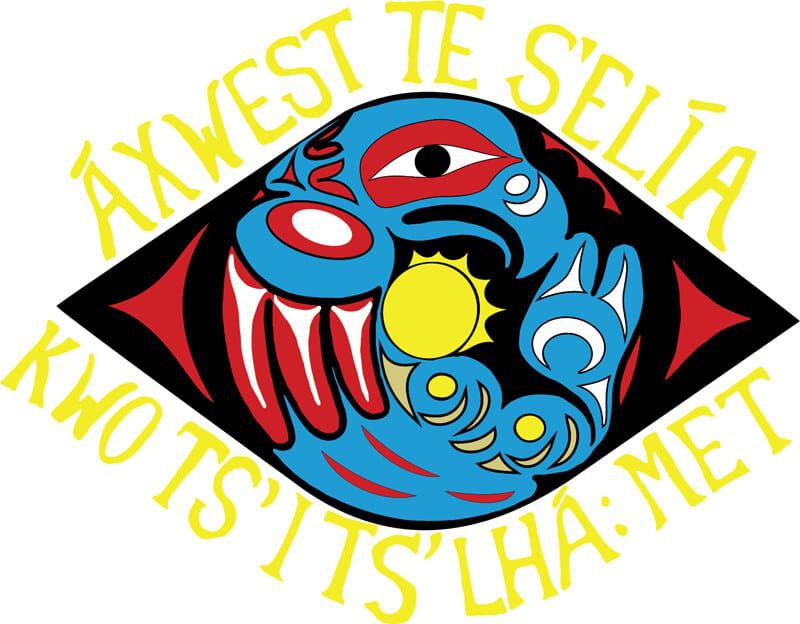 Stay tuned for a separate event for children under 12!

Save the Date! Children's Christmas Parties

Check our website in the coming weeks for details and how to register. 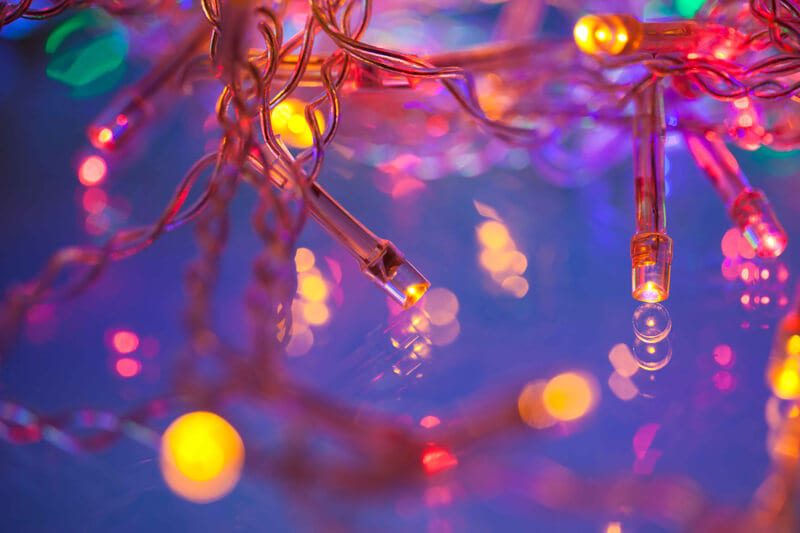 Every year we help spread holiday joy through providing a hamper including food, toys, and gifts to the families and children/youth who receive services through our agency. For many of our families these hampers are the only way they will be able to enjoy a true Christmas meal and have gifts under the tree. Our goal this year is to provide Christmas Hampers for 100 families. We are inviting individuals and organizations to consider participating.

Commitment Forms indicating the manner in which your contribution will be made are available by contacting [email protected] .  We are asking for commitments before November 15. Monetary donations can be made by making a cheque payable to Fraser Valley Aboriginal Children and Family Services Society. Our address is: Bld. 1, 7201 Vedder Road, Chilliwack, BC, V2R 4G5. A taxable donation receipt will be issued for cash donations of $25 and more. Sorry, we can't issue tax receipts for gift card or hamper donations Thank you in advance for your support!

A taxable donation receipt will be issued for donations $25 and over. 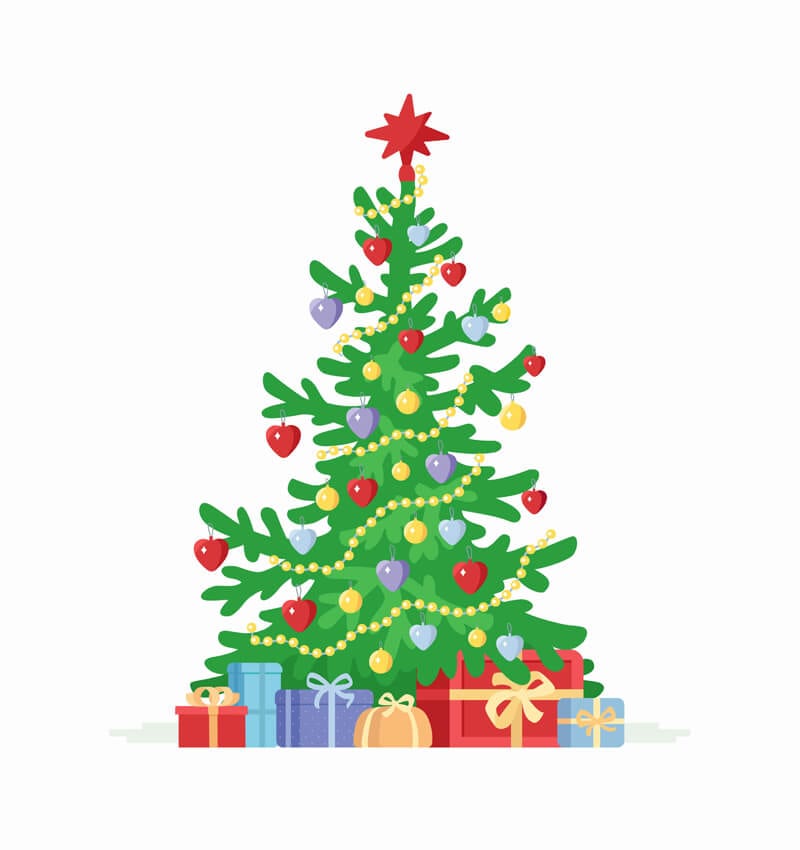 Attention visitors to our offices:
Please note that our Tzeachten location (6200 Matheson Road, Chilliwack) will be closed due to planned power outage on January 24.